This post was originally published on August 21, 2009 and is now being being republished as it has beenentirely revised. Both original methods are removed and now replaced by four new methods.

The goal here is a background image on a website that covers the entire browser window at all times. Let's put some specifics on it: 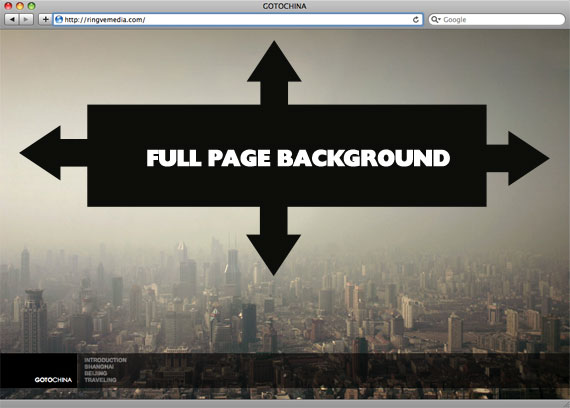 Image above credited to this site.

We can do this purely through CSS thanks to the background-size property now in CSS3. We'll use the html element (better than body as it's always at least the height of the browser window). We set a fixed and centered background on it, then adjust it's size using background-size set to the cover keyword.

Update: Thanks to Goltzman in the comments for pointing out an Adobe Developer Connection article which features some code to make IE do cover backgrounds as well:

But careful, reader Pierre Orsander said they tried this and had some problems with links on the page going dead.

Update: Matt Litherland writes in to say that anyone trying to use the above IE filters and having problems with scrollbars or dead links or whatever else (like Pierre above) should try NOT using them on the html or body element. But instead a fixed position div with 100% width and height.

Big thanks, as usual, to Doug Neiner for this alternate version. Here we use an inline<img> element, which will be able to resize in any browser. We set a min-heightwhich keeps it filling the browser window vertically, and set a 100% width which keeps it filling horizontally. We also set a min-width of the width of the image so that the image never gets smaller than it actually is.

The especially clever bit is using a media query to check if the browser window is smaller than the image, and using a combo percentage-left and negative left margin to keep it centered regardless.

Here is the CSS:

One rather simple way to handle this is to put an inline image on the page, fixed position it to the upper left, and give it a min-width and min-height of 100%, preserving it's aspect ratio.

However, this doesn't center the image and that's a pretty common desire here... So, we can fix that by wrapping the image in a div. That div we'll make twice as big as the browser window. Then the image will be placed, still preserving it's aspect ratio and covering the visible browser window, and the dead center of that.

Credit to Corey Worrell for the concept on this one.

This whole idea becomes a lot easier (from a CSS perspective) if we know if the aspect ratio of the image (inline <img> we intend to use as a background) is larger or smaller than the current aspect ratio of the browser window. If it is lower, than we can set onlythe width to 100% on the image and know it will fill both height and width. If it is higher, we can set only the height to 100% and know that it will fill both the height and width.

We have access to this information through JavaScript. As usual around here, I like to lean on jQuery.

This doesn't account for centering, but you could definitely alter this to do that. Credits to Koen Haarbosch for the concept behind this idea.

Update (June 2012): Reader Craig Manley writes in with a technique to load an appropriately sized background image according to screen. As in, don't load some huge 1900px wide background image for an iPhone.

If you don't like the gif shim (personally I think it's OK because it's not "content" it's a background) you could load up one of the real images instead. This code will account for that.

Then you test the screen width and set the src of the image based on it. The code below does it on resize, which you may or may not want. You could just run the code once if you wanted.

Note that screen width isn't the only possible good information to have when choosing an image size. See this article.

If you use this, please feel free to leave what technique you used and if you altered it in any way in the comments below. Always cool to see techniques "in the wild."

Just for posterity's sake, there is another example in here called table.php which uses an old technique that used to be a part of this article. It had some cleverness, but wasn't quite as good as either CSS technique now presented above.